bon bon
Originally uploaded by Ciscokid1.
My daughter as a bon bon in The Nutcracker. She was very happy and excited to have participated in this production here in Vegas. She is already looking to next year's performance.
Posted by Cisco at 8:45 AM 2 comments:

So what will 2006 bring us in the field of American politics?

One thing for sure is, the Bush White House will continue to "surprise" us with more and more revelations about the on-goings behind the much secretive administration.

Consider the latest "leak" about the NSA spying on American citizens...All this without a court order.
Frankly, I don't care about the spying or surveillance. I for one have nothing to hide, as I am sure most of the citizens of this country feel. If I am pulled over because I fit a certain description in their APB's, so be it. I have not committed a crime.
The only problem as I see it, is that eventually, someone will get carried away. A "right" minded law enforcement agent with his own agenda. At that point, who does he respond to?...Where are the guidelines for him or her to follow when they begin to trample on innocent people?
Right now the administration has a carte blanche in regards to law enforcement and by default, any and all other law enforcement agencies. This is something that you would find in any third world country. All you have to do is go back to any Latin American country in the 70's where most governments were of an authoritarian nature, thus they sequestered, jailed and executed any who would oppose them, without the smallest appearance of a justice system. (Of course, the tables have turned and many of these ex-leaders are now under "investigation" or in jail for the alleged atrocities committed agains their own people)
Another interesting aspect of these governments was the fact that most were supported by American administrations; whether Republicans or Democrats There were no doubts that millions of dollars were going to these countries to support these governments.
This is the risk that the US runs if it allows the "Patriot Act" and or other acts which undermine the freedom that citizens have enjoyed and still enjoy here in the States. It is a dangerous slope that our government could easily go down into.
It is taking the easy way out. By allowing Law enforcement the right to do as they please in regards to "law enforcement", they are being told that regardless of the way that they obtain information on any person, they will not be subject to prosecution.
Isn't that why the FBI was instituted to begin with?...
To investigate and prosecute any "domestic" crimes?...So what if the crime has not been committed (As they have explained-after the September 11 attack).
You suspect someone of planning an attack?...Spy on them listen to their phone conversations, follow them and prosecute them. However, only after all proper procedures have been followed (Obtain a warrant, or court order).
I want to be as safe as everyone else. I want to be protected against any attacks from anyone, including our own government.
Any law that pretends to protect us as Americans or other, needs to be tailored after our constitution. The FBI's procedures need to be revised to allow certain freedoms in regards to law enforcement, without breaking any laws.
The current actions by the current administration are an example of a government ready to turn the leadership to shady characters who feel above and outside the law. This is already a big revelation in 2005. What else can we expect in 2006?...
We have yet to see.
Posted by Cisco at 2:27 PM No comments: 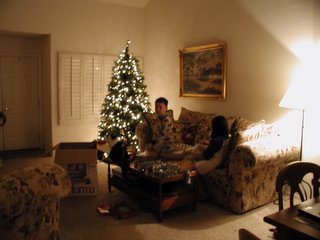 Today, I will take a picture for you.
A picture that shows the spirit of Christmas.

In the meantime.
Merry Christmas to all of you.
Posted by Cisco at 8:16 AM 2 comments:

Yes, she did. and if you are reading it right now, (Melissa). You made me realize that I have nothing to hide.
I was afraid that you might read it but then again..
It is posted online for the world to see. The world includes you. 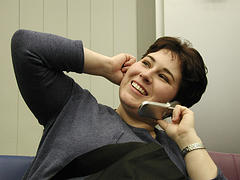 Aside from making me look like a fool because of some of my writings, what can I say. I am a guy and every now and then I behave like one.
Nonetheless, if she needs to hear it or read it.
here it is.

I love you.
You are a wonderfull mom.
You are a great girlfriend.
You have been through so much with me that I cannot find the words to thank you other than to say , "I Love you".
I hope you know it.
We have had our issues, but they are meaningless and small.
Everyone has them. (Just read all the bloggs around)
I still have a lot of issues. You still your own.
Such is life and we just have to balance them out and make the best of it.

Yes, just last week you were asking me about reading my blogg.
and you've done it.
Posted by Cisco at 5:33 PM 3 comments:

Wow!
2006 coming up really soon.
When I was a kid I used to wonder about the year 2000. Whether it was religiuosly induced or just "cultural myth", my friends and I used to talk about the end of the world. I also used to count the years left till 2000. Of course this was back in the 70's....At some point I just forgot about the whole thing and 2000 came and went.
Now we are well into th 00's. Closing on 2010.

What were you like when you were a kid?...
what things did you worry about?....
Merry Christmas to you all.

Feliz Navidad a todos
Posted by Cisco at 7:36 AM 3 comments:

Imagine there's no heaven
It's easy if you try
No hell below us
Above us only sky
Imagine all the people
Living for today...

Imagine there's no countries
It isn't hard to do
Nothing to kill or die for
And no religion too
Imagine all the people
Living life in peace...

Imagine no possessions
I wonder if you can
No need for greed or hunger
A brotherhood of man
Imagine all the people
Sharing all the world...

Yes, finally it is here.
Christmas.